After our time in San Sebastian, we were excited for our next leg of our journey in France.  Our first stop was in Bordeaux.  Renowned for its famous wine country and Chateau’s, we were eager to learn the best of Bordeaux from a local.  We were lucky to meet Yov, an awesome host on couchsurfers, who invited us stay with him in his old Chateau.

His home was very charming, and dated back to the 19th century. It had a nice backyard, and a bohemian feel on the inside.  The home was located on the sprawling property of the Bordeaux psychiatric institute, where Yov served as the Director and was given the house to live in. 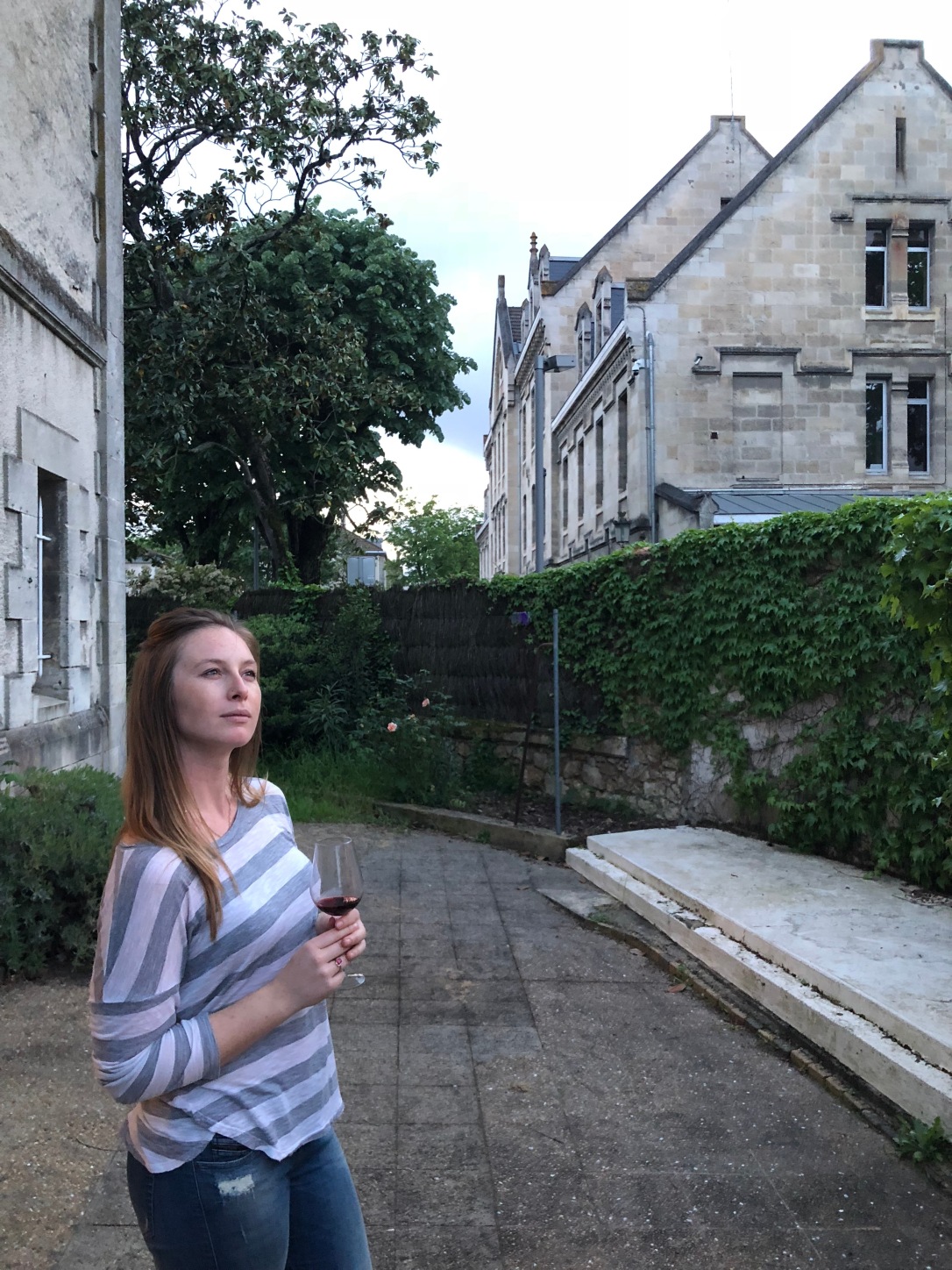 Yav shared the space with his friendly cat

Yov was a true host, and invited us to cook and dine with him during the first night of our stay.  We walked to the local market and prepared a feast together. 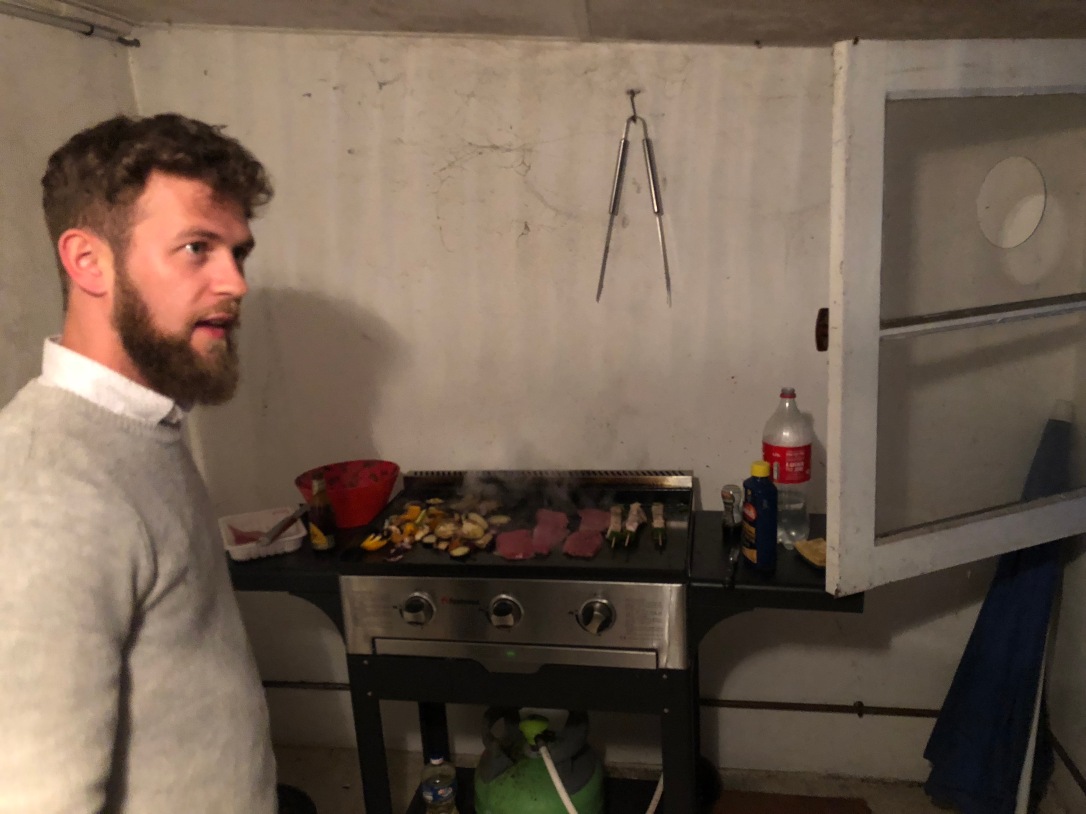 After a good night’s sleep we were excited to get out into the countryside, and explore the vineyards.  We wanted to see how they compared to Napa Valley back home. Our first stop was at Chateau Canon, which we learned is owned by the Chanel family.  While they weren’t offering any tastings that day, we had a good time walking around the property. 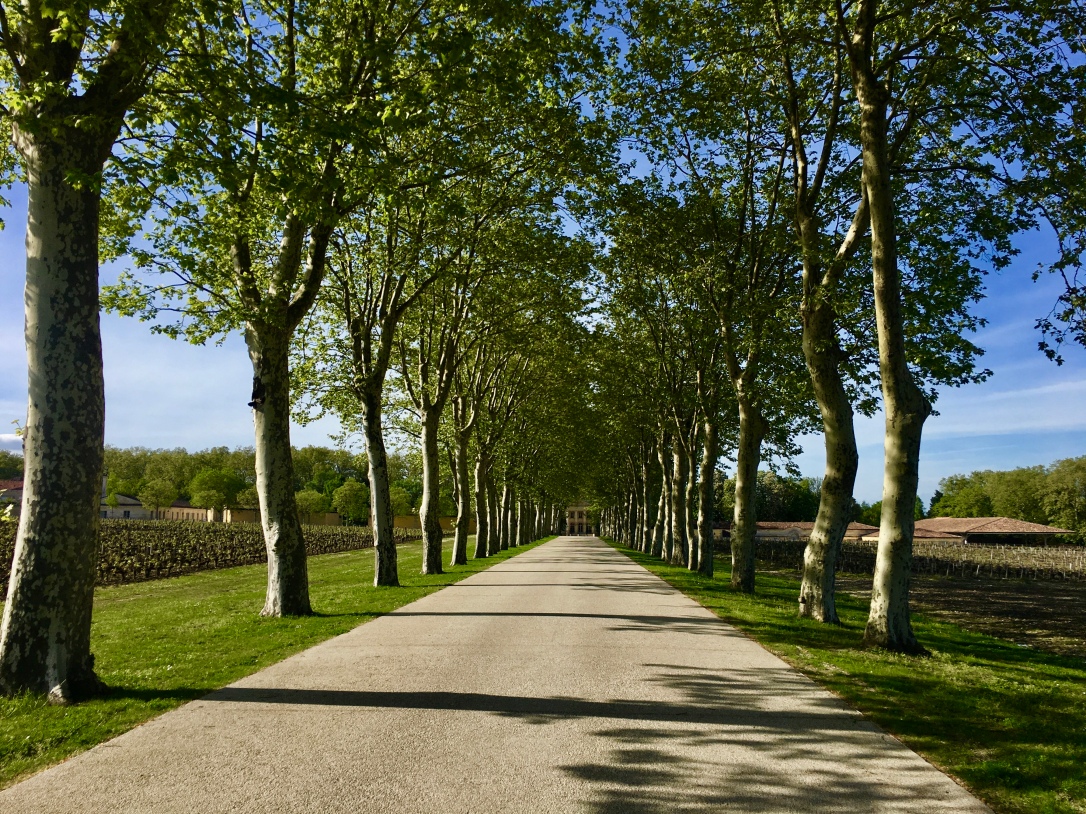 Next we tracked down a recommended winery called Chateau Prieure Lichine.  We went inside and were given a free wine tasting, and a history of the vineyard tasting the best years of each wine.

After the wine tasting, we decided to grab a bottle of wine and some picnic food, and find a nice spot along the Rheine river to eat lunch.  We parked our car in a secluded sunny spot with only the sounds of birds as ambiance. The riverside was peaceful, with slow meandering water and occasional fisherman passing on their small boats. 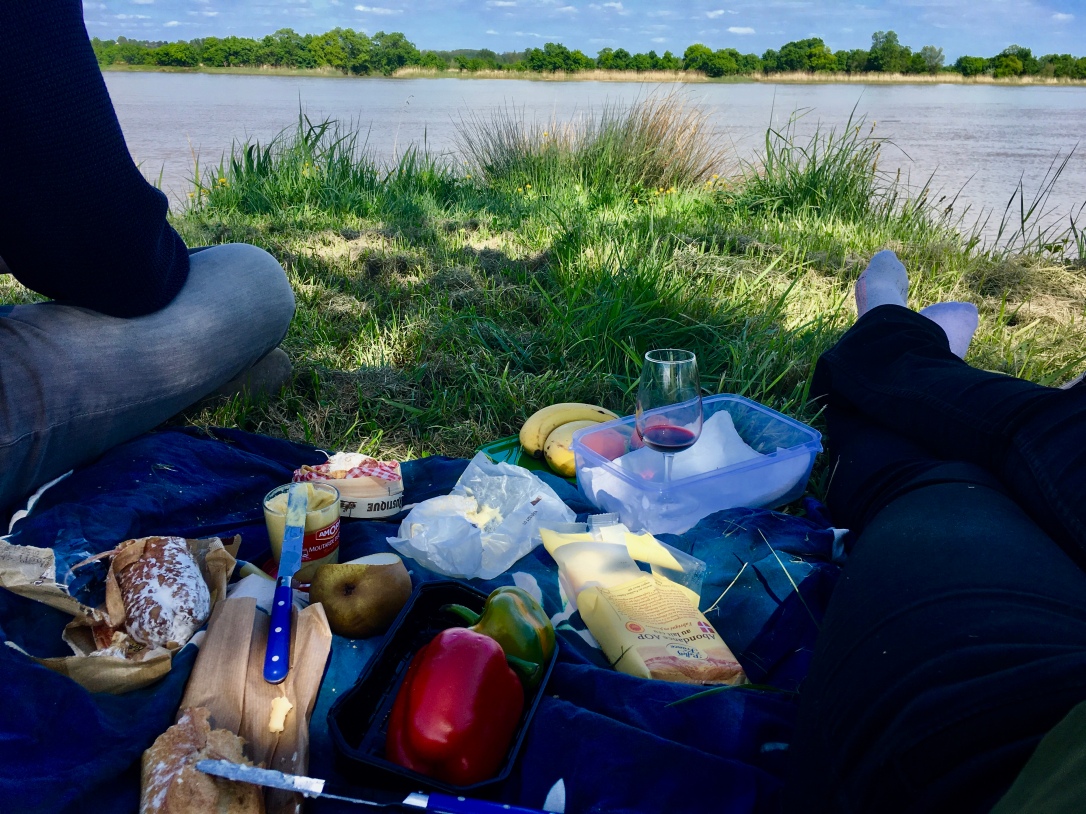 After a couple days in Bordeaux, its was off to Paris.  We had the genius idea of avoiding tolls while driving there to save money.  While it may have taken an extra 3 hours to drive, we got to see plenty of french countryside to make up for it. 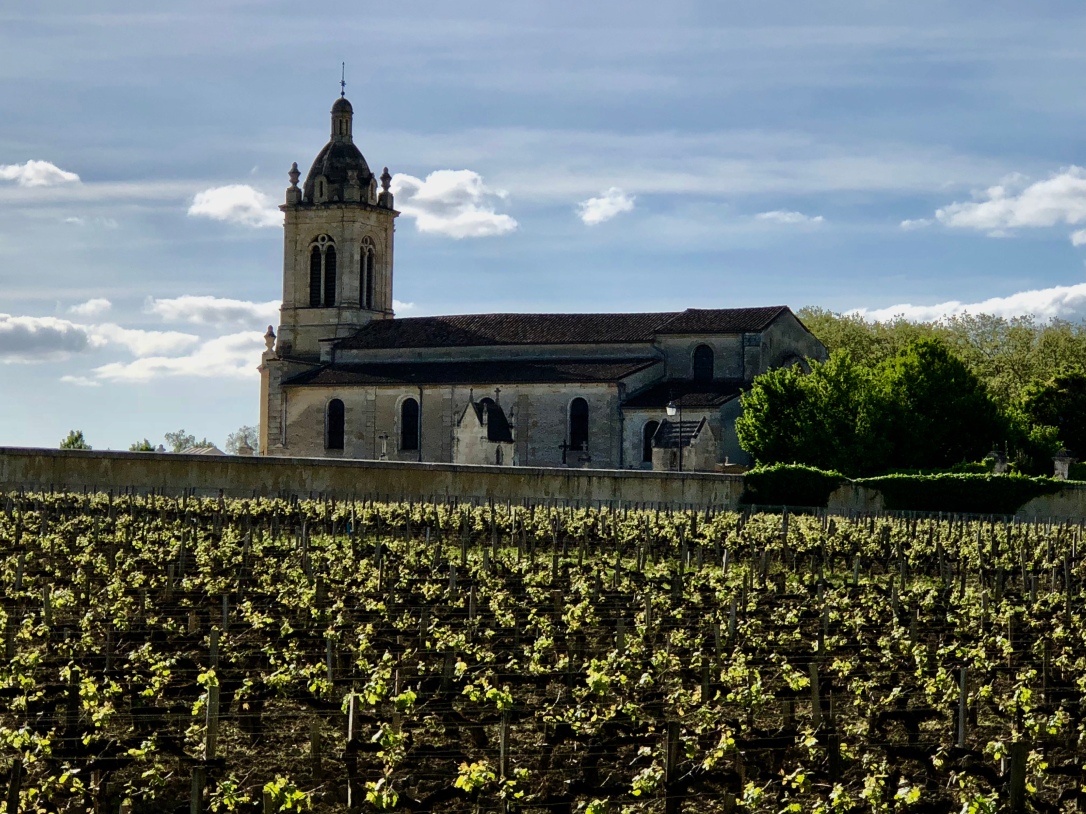 Upon Arriving in Paris, we parked our car outside the city and headed in by Train to our new home in Le Marais.  This area was buzzing with activity, and we soaked in the sounds and smells of the French capital over dinner.

Our Airbnb was a short walk down to the Seine River, where we caught a sunset before heading to dinner.

We had dinner at a local spot in Le Marais called Les Philosophes.  It had great music, and we tried local favorites like Foie Gras and Beef Bourguignon. 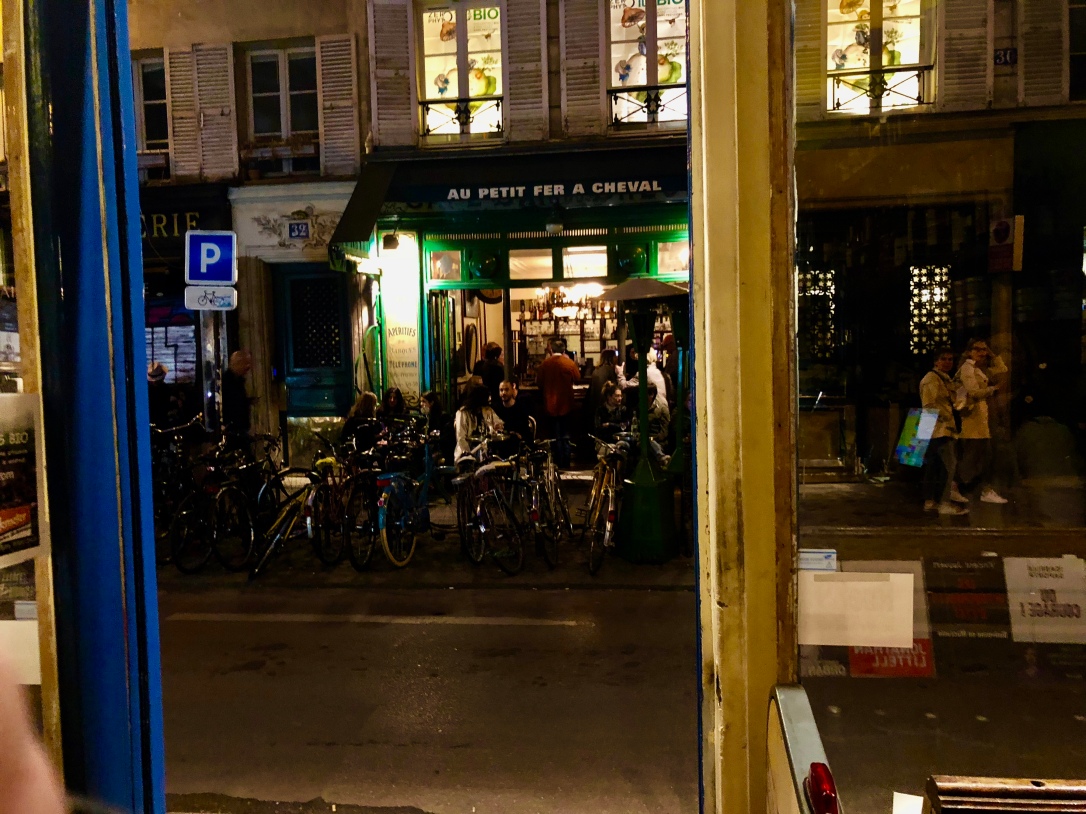 Though we decided the line was too long to go inside, the architecture of the Notre Dame was quite impressive from the outside.  The sizes and shapes of all the different gargoyles was fascinating to see.

Breakfast in Paris an endless array of choices.  Usually we settled on a buttery croissant, a quiche, and a coffee.

In one pastry shop we discovered something called the Beignet cycle. The Beignet was a light powdered donut with chocolate cream filling on the inside. Typical emotions ranged from curiosity, then disbelief, and finally acceptance that this pastry was indeed real.  It may be the best thing I have ever tasted. 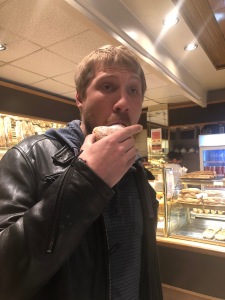 After a visit to the Louvre on a rainy day, we ended our stay in France with a nice french meal of steak and wine.  We had a great time in France, tasting the food and taking in the history and culture.

2 thoughts on “The French Connection”